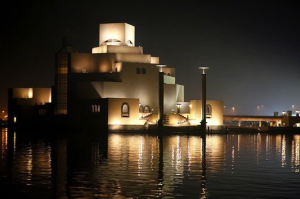 The Museum of Islamic Art is dedicated to reflecting the full vitality, complexity, and diversity of the arts of the Islamic world. It is a world-class collecting institution, which preserves, studies, and exhibits masterpieces spanning three continents—including countries across the Middle East, and reaching as far as Spain and India—from the seventh through the 19th centuries.
As a centre for information, research, and creativity, the museum engages global audiences and serves as a platform for dialogue and cultural exchange. Designed by world-renowned architect I.M. Pei, the Museum of Islamic Art is an architectural masterpiece rising from the sea off Doha’s Corniche. Completed in 2008, the stone-clad museum is composed of a five-story main building and a two-story education wing connected by a central courtyard.

The museum is exhibiting an art collection dating from the eighth century to the 19th from across the Islamic world and countries that have been influenced by Islamic artistic trends, such as India and Spain.
The museum also displays metalwork, ceramics, precious stones and jewellery, woodwork, textiles, ivory, examples of Islamic calligraphy, ancient books and portraits.

The museum has at least 4,500 objects but only about 850 will be on display at any one time.

Arab envoys in Qatar say the museum will play an important role in deepening the relationship between the East and West.

See More About The Museum of Islamic Art.